In a convulsive age of uprooted populations, environmental degradation and the extinction of both species and cultures, it is increasingly difficult to hold onto spaces, places and moments which convey value and meaning. In this context, the appreciation of art becomes an essential experience.

Unfortunately a pervasive and ingrained institutional ideology tells us that the arts are cultural constructions, that you can’t compare arts from one culture to another, and that artistic forms are not universal. But if we delve deeper into the commonality of art across cultures, the revelations are fascinating. In reality, the arts occupy a central place in human experience around the globe. They take place in all cultures in a spontaneously understood, pleasurable world of the imagination.

Evolutionary biologists and anthropologists categorize human development based on criteria like tools, language, dwellings, etc. The epoch we currently live in is called the ANTHROPOCENE, meaning that human development has intruded on the world environment. The preceding epoch is called the HOLOCENE, and spans the earliest beginnings of cities, the domestication of animals, the invention of money and the many great leaps in language and technology. That period started 10,000 years ago and terminates in the mid 20th Century. Based on a life span of 30 years per generation, this encompasses a mere 600 generations, and less than 300 generations since Plato.

Prior to that is the PLEISTOCENE epoch, Homo Sapiens hunter-gatherers living in tribes, wandering the landscape, their survival revolving around coexistence with other species. That epoch lasted 1.8 Million years — 80,000 thousand generations — which is an astonishing amount of evolutionary development, when compared with the 600 generations of the Holocene epoch. Here is the point: the Pleistocene epoch defined who we are. Love, hate, jealousy, envy, compassion, greed, faith, appreciation of art… an entire spectrum of human logic, emotions and beliefs was set in motion during this period. When you look at a work of art, take a walk in the woods, have a profound secular or spiritual experience, all these feelings were defined during the Pleistocene epoch, prior to the emergence of language, money and domesticated animals. This is the key to understanding the universality of art. Art bridges a gap between our primitive and our modern selves.

The Lascaux Caves, the monoliths of Stonehenge, aboriginal glyphs, proverbs, sagas and folk songs all illustrate that storytelling dates from the beginnings of human interaction, before the written word. Throughout the ages, artists have been profoundly influenced by our Pleistocene ancestors, who sought out sources of food, water, safety and visual inspiration for sustenance and survival. From the earliest depictions of landscapes, moving forward past Albert Bierstadt, Thomas Moran and the West Coast photographers, our environments have consistently been portrayed as places of refuge and inspiration. It makes evolutionary sense that representational art and storytelling are essential aspects of an ART INSTINCT that developed along with fear, desire, envy, compassion, jealousy, faith… and all the other complex human traits.

THE EPIC OF GILGAMESH is the perfect example of what I am talking about. This was the very first narrative in the Western canon to be recorded and handed down to us from prehistory. Written around 2800 BC, it is supremely instructive about the thesis of this artist’s statement. First, a synopsis: a prostitute outside the gates of a city runs into INKIDU, a hunter-gathering Pleistocene human. She takes him into the city, and eventually Inkidu finds himself in the throne room, before the King, GILGAMESH, a Holocene human. First, they have a violent fight. Then they become great friends. In essence, Pleistocene Human, our pre-literate, pre-conscious self, meets and begins a dialogue with our conscious self. But Inkidu gets sick and dies, from what must have been a modern illness like smallpox, which decimated many Aboriginals in the new world. Now a grieving Gilgamesh is compelled to voyage into the underworld — his unconscious — to try and reunite with his pre-literate friend. At the dawn of narrative storytelling, this “encounter” goes to the heart of what Carl Jung, Joseph Campbell and countless other “narrative anthropologists” articulate. That myth, conveyed through art, re-unites our conscious with our unconscious.

Like music, performance and painting, photography uses the vehicle of storytelling to speak directly to our unconscious. The successful photograph has no sound track, no actors and no language in a spoken sense, but it tells a story nonetheless. This is what my landscape images aspire to communicate: the mystery of our origins, complexity that outstrips logic, mythological transformations and the illusion of physical death. The images bind us together, within the borders of the landscape, and evoke that preliterate sense of place which tells the story of us all. 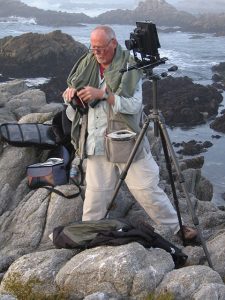 Here is an excerpt from one of Mr. Miner’s theories on aesthetics: “Neurophysiologists and art scholars agree that complexity creates conditions which transcend logic. Like jazz, classical music, abstract painting and cinematic montage, visual complexity resists analytic interpretation. As the mind fails in its attempt to organize a chaotic image, a reverie develops. Only poetry, the last refuge of language, comes close to evoking this experience.” The events portrayed in Mr. Miner’s photographs are not repeatable. Subject matter, time of day, season of the year, location, prevailing weather and singular point of view dictate unique angles of shadow and light.