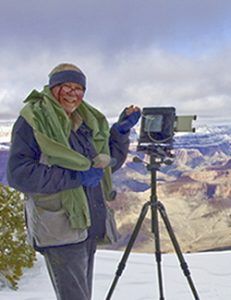 Michael Miner at the Grand Canyon. Photo by Mollie Isaacs

In 2002 Michael Miner commenced a series of studies which chronicle the chaos, beauty and soul of the landscape. After almost two decades of accumulating and printing images, a body of work has emerged. Portfolio titles include THE FIRST DAY, THOREAU’S CHILDREN, METAMORPHOSES, TREEBONES, CHAOS THEORY, TIDELANDS, WATER STUDIES, ASPEN STUDIES, THE GATELESS GATES and OVERCOMING PHYSICAL DEATH.

In the Fall of 2010 and 2011, Mr. Miner exhibited one-man shows at The Brewery Artwalk in Los Angeles. In 2010 and 2013, Mr. Miner received MERIT AWARDS from Black and White Magazine, which published images in two Portfolio Edition issues. In 2011, 2013, 2014 and 2016, the prestigious Center for Photographic Art in Carmel, California selected a series of Mr. Miner’s images for its Juried Exhibitions and in 2014 the Santa Barbara Museum of Art acquired one of the GATELESS GATE series for its permanent collection.

Mr. Miner has received two Artist-in-Residence Grants from the National Park Service, spending January of 2011 at the South Rim of the Grand Canyon and October of 2014 at its North Rim, also travelling to Chaco Canyon, the World Heritage Site in central New Mexico. In May of 2016, the Brush Creek Foundation for the Arts invited Mr. Miner to a month-long residency in South Eastern Wyoming, where he captured images in the remote and primitive Medicine Bow National Park.

Coinciding with his love of photography, Mr. Miner is also an accomplished screenwriter, cinematographer and teacher. He received a Master of Fine Arts degree at the Theater, Film and Television Department of the University of California, Los Angeles. While there he wrote and directed LABYRINTHS, which won a Focus and Cine Eagle Award, ALIAS JANE DOE, which was exhibited at the Deauville and Bilbao film festivals, and COSMOGRAPHIA, exhibited at Filmex. At UCLA he was also a cinematographer of seven student films including the feature film SCARRED, which was exhibited commercially, and FOOL’S DANCE, which was financed and distributed by the Public Broadcasting System.

Mr. Miner’s professional career includes time as a director/cameraman of six music videos. As co-writer of the original ROBOCOP, the iconic action film about the part man/part machine law enforcer of the future, Mr. Miner received the SATURN AWARD for Best Science Fiction Screenplay and a nomination for Best Screenplay by the Mystery Writers of America. He also shares co-writing credit on the 2014 remake of ROBOCOP as well as the pilot for ROBOCOP: THE TELEVISION SHOW, produced by Sky TV. He is also the screewriter of ANACONDAS: SEARCH FOR THE BLOOD ORCHID, the action adventure sequel about humans battling deadly snakes, and LAWNMOWERMAN II, the science fiction sequel to the story about an idiot savant trapped in a virtual reality computer program. Mr. Miner made his debut as a writer/director with DEADLY WEAPON, a drama about a teenager who finds a prototype Star Wars weapon and uses it to take a desert town hostage. His second feature as a director was THE BOOK OF STARS, magical realism about the troubled relationship between two sisters and a memory book that has the power to anticipate future events. Mr. Miner discovered the script while teaching at the Maine Photographic Workshops.

Mr. Miner has written screenplays for Oliver Stone, Sylvester Stallone and Michael Douglas. He is currently writing the next installment of the ROBOCOP motion picture franchise, along with a television series about the dystopian aspects of digital information. He has taught screenwriting at the Maine Photographic Workshops, the University of Hawaii, the Southeastern Media Institute, the Praxis Center for Screenwriting, the University of California at Santa Barbara and California State University, Los Angeles. He is developing for production a number of screenplays written by the students he mentors. For eight years, in association with a non-profit organization called INSIDEOUT WRITERS, Mr. Miner has taught self-expression to incarcerated juveniles at Central Juvenile Hall in Los Angeles.